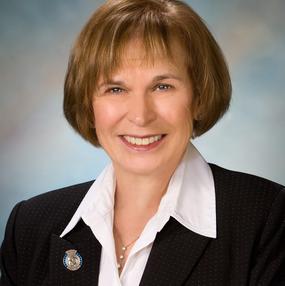 Serving the Children of the World®

​​As the 2015-2016 Key Club International President, I had the distinct pleasure and great responsibility of leading the world’s largest high school service organization. This role gave me unparalleled insights and access to the challenges to which the leader of a civic organization in today’s society must rise. I have worked with dozens of Kiwanis International Trustees and executive officers and thoroughly understand the skill sets needed to lead Kiwanis in such a way that supports and benefits its service leadership programs, and in turn, itself. This understanding qualifies me to confidently state that Dr. Barbara Thompson is the most committed, most capable, and unequivocally most qualified candidate to be the next Vice President of Kiwanis International.

Above all else, one great quality of Barbara Thompson’s defines all of the others: she cares. To Barb, sincerely caring is no laudable achievement or remarkable effort; it is simply the standard to which she completes every task in her many roles as Kiwanian, educator, counselor, and friend. A few short weeks into my time as President, Dr. Thompson asked me what my dreams were for Key Club on a walk through downtown Indianapolis. I shared, and we conversed. Months later, she remembered each and every thing I had stated in that conversation--not because she wished to impress or felt obligated. She remembered because she cared. Barb fleshed out ideas and goals with the Key Club Board in the morning and enjoyed a lively dinner and game of laser tag the same night. She was the first to arrive and last to go--on many days, she left us teenagers in the dust.

Barbara Thompson guided our board with a wise and gentle hand. She never once overstated her role but continually understood her responsibility. I consider her to be my greatest aide and mentor through my year of leading Key Club International.

As Woody Allen famously asserted, 80% of life is just showing up.  Kiwanians, Dr. Barbara Thompson always shows up. She shows up and gets incredible things done, doing it all with a warm smile and a servant’s heart. She will work with you, fight for you, learn about you, and listen to you. She will be your strongest advocate and closest friend. Barbara Thompson will do the 80% of showing up--she will never, however, stop there.

Few Kiwanis members have instilled in me such a passion for the organization and its global mission as has Barb Thompson.  Barb understands the importance of growing a younger, more diverse membership base for Kiwanis International.  More than that, she’s already committed herself to building one in Missouri-Arkansas.  During her term as Governor, Barb worked more closely with members of the many Kiwanis Service Leadership Programs than any Governor with whom I’d previously interacted; that’s how she and I first met and became friends. Her rhetoric of familial unity was inspiring, and could be matched only by the conviction with which she tirelessly carried out every item on her lengthy “To Do” list.  Barb never lets a stakeholder stay silent, a stone go unturned, or a project be left unfinished.  She is passionate, driven, and poised.

She has been there to support Circle K numerous times. She worked closely with me to help find sponsors for Circle K Clubs and has been working with her club to sponsor one as well. I also have had the privilege of working alongside her at Key Leader this past fall. No matter what SLP you’re in, she will be there to help guide you and support you!

I see no better candidate than Barb Thompson for Kiwanis Vice President.

Sara NguyenGovernor, Missouri-Arkansas District Circle K International  2014-2015
Malaysia Liaison, Circle K International Expansion Committee 2013-2014
*******​~~~~~~~~~~~~~~~~~~
************************
I had opportunity to observe Barbara Thompson as Club President and Lt. Governor to some extent, but I had the opportunity to observe and work with her much more closely as Governor.  Barb is a very enthusiastic, dedicated Kiwanian who is focused on growing the Kiwanis organization.  As Governor, Barb always went far above and beyond the call of duty.  She has great organizational skills.  She studies issues thoroughly and is one to ask many very thought-provoking questions regarding issues that come to her attention. She is a very energetic person who never seems to tire and works as long  as it takes to complete a task.  As well as serving in the elected positions above, she has also worked on a number of district committees.  She led a committee in the Mo-Ark District to develop a five-year strategic plan and continues to monitor the plan and update it as changes occur.
Barbara has proven herself to be a very worthy of moving to the next level as Vice President.  I am happy to endorse Barbara Thompson as a candidate for Kiwanis International Vice President.
​

Dr. Thompson has been a member of the Florissant Valley Kiwanis Club for many years. She is an extremely active and valuable member of the club.  She brings with her a professional background which, when combined with her extensive education, training, organizational skills, and her servant heart, has been an incredible asset to our club, as well as to the district. She has never been content to just attend meetings and work on a project here and there, but has been driven from the very beginning to commit her time and energy to making the world a better place though Kiwanis.  She has consistently been willing to take on ever-increasing responsibilities in both our club and in the district.
It has been my pleasure to have been associated with Dr. Thompson for these many years, and I have no doubt that the International organization will benefit greatly from her contributions.

​Barb’s leadership on the Kiwanis Camp Wyman Board, as a former Governor, and simply as a rank-and-file Kiwanian, has been invaluable in our ability to serve at-risk teens.  Being both an educator and a committed community service person, Barb brings a highly relevant  and in-tune perspective to all her actions on behalf of Wyman teens.  The board, staff and I wholeheartedly endorse her pursuit of higher office in service to Kiwanis International and look forward to seeing her further excel in her next undertaking.
​

I have had the pleasure of working with Dr. Barbara Thompson for more than 20 years as a leader of Hazelwood School District's Strategic Planning Committee, a leader of the District's successful tax levy initiatives, and as Vice President of North County Churches Uniting for Racial Harmony and Justice Organization. I can say without hesitation that she is the hardest working, most dedicated, and committed individual I have had the pleasure to know.  She is completely committed to improving the conditions of youth and adults within the community and the country. I have also observed her incredible commitment to the mission of the Kiwanis Club.  She does not hesitate to go and do whatever is needed to do the work of the Kiwanis.  Further, she is one of the most articulate and passionate individuals I have ever known. It would be a terrible loss if Kiwanis does not take advantage of her many talents and commitment.

Dr. Barbara Thompson's nomination for the office of Kiwanis International Vice President by the Missouri-Arkansas District follows a natural trajectory of her service to the region.  Dr. Thompson has a heart to serve Kiwanis International on a global level because when she is a member of an entity, she is entirely committed.  I observed her commitment while serving with her as assistant superintendent of the Hazelwood School District. As a member, then board member, then vice-president, then president, of the Florissant Valley Kiwanis Club in Florissant, MO; Lieutenant Governor of Division 7; and ultimately Governor of the Mo-Ark District, Dr. Thompson embraced international by-laws and made sure that they were used to guide the clubs and the region.  Her immersion in Kiwanis International has led her to attend International Conventions, not only in the United States, but in other countries, as well.  Finally, I would like to add that anyone who knows Dr. Thompson will affirm that she is a servant leader who embodies all six objects of Kiwanis.

I have had the pleasure and honor of working closely with Barb since the day she was elected Governor-Elect.  I told her that I was planning on running for the position the next year and that I wanted to "shadow" her. For the next five years, we worked side by side for the Missouri-Arkansas District on many different endeavors. She lives Kiwanis; she emulates the objects of Kiwanis as much as anyone I have ever met in our great organization, always thinking of others before herself.  She lives our defining statement, as she is driven in her purpose to improve the world one child and one community at a time.  She will make an outstanding International Vice President.